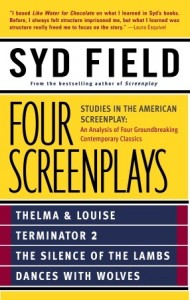 “A first-rate analysis of why good screenplays work: a virtual must for aspiring screenwriters.” —Lynda Obst, producer, How to Lose a Guy in Ten Days, Sleepless in Seattle

“One of the very best books I have read on movies or screenplays. Syd writes both with passion and an astute understanding.” —Hans Zimmer, film composer, Inception, Pirates of the Caribbean: The Curse of the Black Pearl,  The Da Vinci Code,  The Dark Knight, Gladiator (Won Golden Globe), The Lion King (Won Oscar, Golden Globe), Thelma & Louise

Technology is transforming the art and craft of screenwriting. How does the writer find new ways to tell a story with pictures, to create a truly outstanding film? Syd Field shows what works, why, and how in four films: Thelma & Louise, Terminator 2: Judgment Day, The Silence of the Lambs, and Dances with Wolves.

Journey with Syd Field through these extraordinary scripts, and learn how:

Informative and utterly engrossing, Four Screenplays belongs in every writer’s library, next to Field’s highly acclaimed companion volumes, Screenplay, The Screenwriter’s Workbook, and Selling a Screenplay.