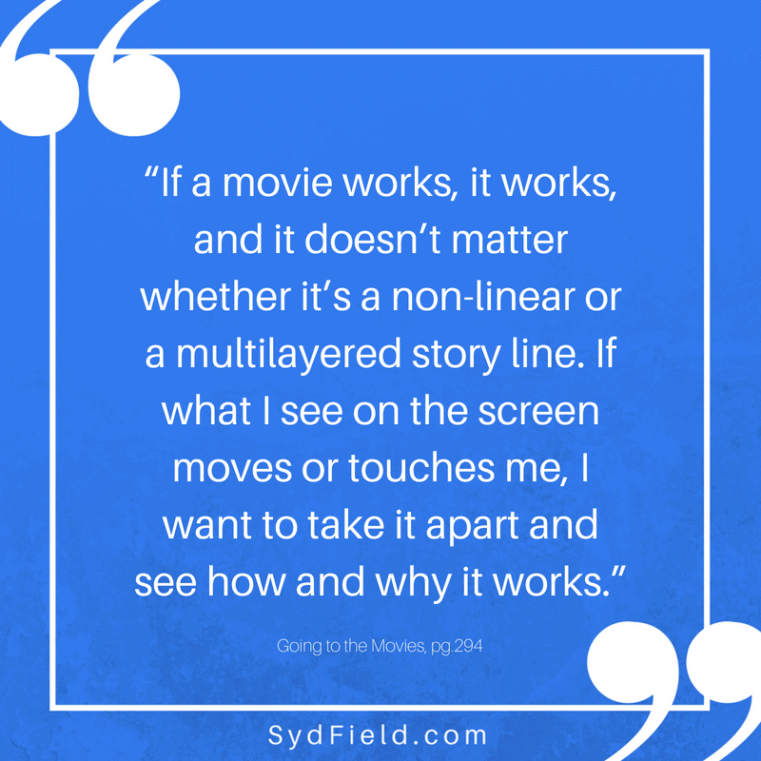 August 13, 2018
Guest BlogComments Off on “Going to the Movies” and Long-Form Narrative Series
By Shari Goodhartz

Going to the Movies is Syd Field’s memoir, tracing his unplanned path to become the authority regarding dramatic structure and visual-storytelling over the course of four decades of well… going to the movies.

Field’s expertise was honed by impassioned conversations with some of the 20th-century’s innovative grand masters of filmmaking, starting with his mentor Jean Renoir, as well as Sam Peckinpah, Waldo Salt and many others. In addition, Field spent years analyzing thousands of screenplays, identifying the essential elements shared by the finest examples of the craft. He eventually graphed these building blocks on his elegant Paradigm. “Form, not formula,” Field often said, and his infinitely flexible model of how movie stories work remains a foundational tool for professional screenwriters in the 21st century.

I was first exposed to Syd Field’s Paradigm in 1985, through The Screenwriter’s Workbook, which I devoured after moving to Los Angeles. At the time, I only wanted to write episodic television, but aside from Field’s books, there were no accessible guides about the nuts-and-bolts of any kind of screenwriting for novices. Luckily, the process of constructing a satisfying, self-contained story for a one-hour TV drama in the ‘80s was almost identical to that for a two-hour movie.

Much has changed, and today’s binge-able long-form series and big-budget franchise features have hybridized, both becoming intensely serialized and so expensive that their stories are structured in massive arcs – more like a string of epic novels with ever-escalating stakes than the discrete tales of the films and television of my youth, as well as golden-age Hollywood. Regardless of changing styles, Syd Field’s Paradigm remains at the core of visual storytelling because it’s rooted in the deep psychology of our shared humanity. His grasp of bedrock principles and their evolving applications continue to sing out to us.

From page 294: “If a movie works, it works, and it doesn’t matter whether it’s a non-linear or a multilayered story line. If what I see on the screen moves or touches me, I want to take it apart and see how and why it works.”

In 1985, while preparing to write my first spec script – a Moonlighting – I spent an intense weekend deconstructing the story structure of the show’s extant episodes. Starting with the teaser, and relying heavily on my remote’s pause button, I notated the slug-line information – INT/EXT. LOCATION – TIME OF DAY – and listed the essential story beats for every scene, moving through each of the four acts and the tag. Basically, I reverse-engineered the script’s outline.

Four years later, I went through similar prep for the spec that led to my first professional sale – a Star Trek: The Next Generation. I quickly realized that five acts replaced the traditional four – this additional act break was an unheralded, but significant, structural shift in storytelling to increase ad time. Television was changing, and it’s morphing even faster today. The current business models for high-end pay TV and streaming have relegated commercial act breaks to the dustbin of narrative history for their subscribers.

In success, today’s long-form TV series require characters’ stories to grow and linger without a full-stop ending each season – these shows are mostly structured like traditional soap operas. “Stand-alone” episodes  have become unicorns, with all of the dramatic arcs for new series woven together by the series creator/showrunner, often with the help of a writing staff.

From page 258: “… Another writer commented that he found the Paradigm valid in terms of writing for television. He was writing a six-hour miniseries for television and only now understood that he could structure the entire six hours on the Paradigm and then structure each of the three two-hour episodes individually on their own Paradigm.”

Starting out, the first season of most long-form series seem to have an overarching storyline that replicates Field’s basic structure – Set-Up, Confrontation, Resolution – but it’s spread out over all of that season’s episodes. Fargo and Jessica Jones are fine examples.

This means that the character, plot and thematic content in Field’s Act One (Set-Up) is extended over multiple episodes. The actual story – which Field defined as what happens after the First Plot Point (Confrontation) – doesn’t start until perhaps two or three hours of screen-time have passed. But traditional Resolutions (as Field denoted for the ends of movies) seem mostly replaced by a relentless series of Plot Points that spin the story/characters in new directions, especially in subsequent seasons.

What’s missing in this, at least for me, is catharsis. For screenwriting, I view catharsis as the emotional release and healing that comes from being engrossed in a narrative journey that has a clear and psychologically insightful conclusion. Catharsis is why humans tell stories. It’s an opportunity for growing-up-by-proxy. Our witnessing a character’s journey from being broken by life to becoming whole (even in death) provides an opportunity to make wiser choices and add less suffering to the world.

From page 287: “I agree it’s time to push the form… Because of the advance of film technology, many of our movies look great, slick as waxed apples in the supermarket, but they’re geared more for the disposable market than anything else. Just look at ‘Mission Impossible: 2’ and ‘The Perfect Storm.’ Both, in cinematic terms, are dazzling, but they’re like cotton candy, nothing more than sugar and water. There’s no content.”

The novelistic long-form television series I’ve watched seem designed to be craved, like candy, leading to a kind of addiction to the “peak” moments and a compulsion to watch the entire series as fast as possible. Recently, I finished “Stranger Things 2,” which is beautifully produced and boasts an incredibly relatable cast. As I was watching, I took time to check in on my feelings, and noticed increasing anxiety to get to whatever happens next. After seeing the final chapter – which tied up every loose end – I find I can’t remember many details, even though I saw the whole season in only the last few days. I’m left with a hollow feeling, and the searing memory of one particularly gruesome scene. Catharsis? Not a whit.

As a contrast, is one of the finest, but mostly unknown, TV series of the last few years: “Underground,” created by Misha Green and Joe Pokaski. It’s a very 21st century take on racial slavery in 19th century America. Despite the violent nature of the subject matter, every episode was deeply cathartic for me. This series’ narrative structure included both serialized and contained storytelling, so even though there were continuing arcs, there were also emotionally satisfying (cathartic) conclusions to every episode. I recommend a trio of episodes as vibrant examples of structural integrity and thematic depth. The first two: season one’s “Cradle” and “Grave.” The third is season two’s “Minty.” This true “stand-alone” episode contains one of the most spectacular televised acting performances of this decade, with Aisha Hinds playing Harriet Tubman.

Lastly, from Syd Field on page 300 of Going to the Movies: “When I first began my career as a writer and teacher, I asked myself what I would like to accomplish in my teachings and books, and the answer that came up was this: I wanted filmmakers to make great movies that would inspire audiences to find their common humanity.”

Wow! As people who value the legacy of Syd Field, let’s all strive to do that…